Invasive Plants in the Garden

Common Knapweed (Centaurea nigra) Photo: Kate Jewell, Wikicommons (License: Creative Commons Attribution-Share Alike 2.0 Generic)
In the state of Wisconsin, the Department of Natural Resources has developed, within Administrative Rule Chapter NR 40, a list of plants and animals  that are considered invasive species in the state.  This science-based rule was developed to provide clear guidance regarding how the public can respond to the threat of invasive species in the state.

NR 40 divides plant and animal species into Prohibited and Restricted classifications. Although plants on the Prohibited list cannot be sold in the state, Restricted plants might still be found for sale at greenhouses and nurseries. Often, when commercially available plants are placed on the Restricted list, growers are given a limited amount of time to sell available stock,  after which growers are no longer allowed to grow and sell the Restricted plant. Thus, when purchasing plants available at your local greenhouse or nursery, do not assume that it is not invasive. Checking the invasive plant list for your state is the best way to assure that what you are buying is not an invasive plant. Every state has its own invasive plant listing. So make certain the list you’re referencing relates to the area in which you live.
​
One final note. It is important to note that when a given plant is placed on an invasive species list, not all varieties of that species are considered invasive. For example, NR 40 lists a number of  Centaurea varieties. However, Mountain Bluet (Centaurea montana), a common garden perennial is not considered invasive. So, again, it is important to reference your state’s invasive plant lists to assure that the plant you are purchasing or receiving from a friend is not invasive.

Difference Between an Invasive Plant, a Weed and an Aggressive Plant 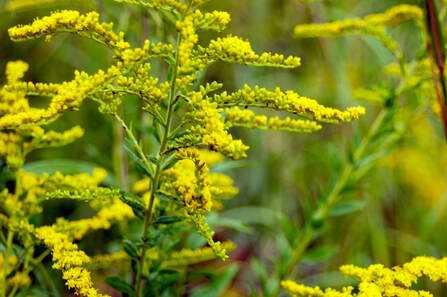 Common Goldenrod (Solidago canadensis) Photo: Frank Mayfield, Flickr
When it comes to identifying invasive plants, it is important to remember that to be considered an invasive plant in must be non-native, and likely to easily spread to the point where they have a critical impact on the native habitat. This does not mean, however, that all easily spreading plants are considered invasive. For example, some native plants can easily spread and invade other plant habitats. For the sake of classifying these plants, some might call them "aggressive" growers. Common goldenrod (Solidago canadensis) is a good example of a native plant that is an aggressive grower. On the other hand, non-native and native plants might easily spread, but do not have an adverse impact on other native plant habitats. Some might call them "weeds". The dandelion (Taraxacum officinale) is a good example. Thus it is important to rely on established invasive plant lists developed for your state when evaluating plants in your garden.

The first step in eliminating or controlling the presence of invasive plants in Wisconsin is to identify where they are in the state. In Wisconsin, the University of Wisconsin has developed the Wisconsin First Detector Network (​fyi.extension.wisc.edu/wifdn/).  As it states on its website: The Wisconsin First Detector Network (WIFDN) is a citizen science network that empowers people to take action against invasive species through invasive species monitoring, management, and outreach. Please check out this website for more information.

If you live outside of the State of Wisconsin, contact your local University Extension office to find out how you can help in your state.

Articles and Other Resources